Aah, it has been a while, since the previous update, this was mainly due to a lack of time 😉 (No, really, I mean it !)

– First of all, in the weekend of october, 25th and 26th, we went to 2 modelrailroad expositions. At Eurospoor in Utrecht, I bought a few electrical couplings for my “Rheingold” trainset. At Modelspoorexpo in Mechelen, I bought a steamloc and a dieselloc. (both equiped with sinus motors and C90 decoders) and some other stuff …
(See the model railroad section for more information)

– Next, there was the “party week”. Christels’ birthday was on november 4th, so I “organised” a few things … First of all, I did buy a Nintendo WII for christel, with a lot of extras included. (balance board, extra controllers, wireless sensorbar etc.)
I allready own 3x Xbox and 2x Xbox360, which Christel rarely plays on, but the WII is really something she enjoys … On Saturday, november 1st, we had a nice diner at “Kaasboerin” in Deurne. They even picked us up with an XXL limo 😉

On Sunday, november 2th, we did take the Thalys to Paris, where we stayed at a hotel, close to “The Louvre”, for 3 nights. We visited the Louvre, the Eifeltower, Arc De La Defence, Arc de Triomph, Mont-Marte (and the Sacre-Coeur), Tour de Mont-Parnas,
The Champs-elysee, and also made a boat-trip on the river Seine.
The day we arrived, the weather was “dry”, but the next days we spent in Paris, were “very sunny” … (as you can see on the pictures)
we had a clear sky, with no clouds at all, local temperature was about 22 degrees Celcius …
Nobody will probably believe me, if I say that I also like ancient art. So check-out the picture,  to see the proof that we really visited the Louvre museum 😉
Ask Christel, I could even tell her which picture was painted by which artist. (Rubens, Da Vinci, Van Dyck, Picasso etc …) I did take about 130 pictures in the Louvre ! (we also saw Napoleons’ salon, the Mona Lisa, ancient Egypt art etc …)

We did even have wireless internet available in the Thalys train. I really couldn’t resist to test this out 😉 What you see beneath this text, is a screenshot of the onboard thalysnet site. It gives realtime information about the speed and location of the train.
This screenshot was taken at the way back home, you can see that we approach the Belgian border with a speed of about 300 KM/hour … 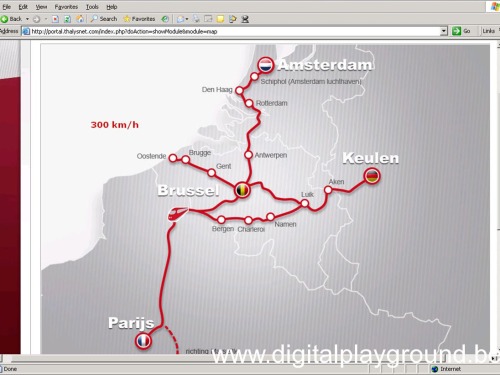 Ofcourse we also did take our GPS logger with us, to geotag our pictures.
Here is a screenshot from Google Earth, after loading our KMZ files. 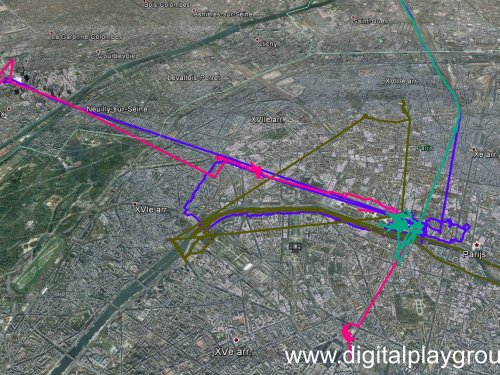 This entry was posted in Blog, Pictures. Bookmark the permalink.